Our customer service representatives are available to answer your questions and assist with your reservations or you may book your trip using our convenient online reservation system.

Since our founding in 1934, Groome Transportation has not wavered from its commitment to passenger and employee safety. Now, more than ever, we are devoted to ensuring the best and safest possible service experience for our customers. In response to the 2019 Novel Coronavirus, or COVID-19, here’s how we’re working to keep you safe when you travel with Groome.  Learn More >>

Our principal focus is on maintaining every possible safe conduct and policy measure to assure protection of our customers, employees and the general public. All statutory DOT and Federal Motor Carrier rules and regulations are adhered to at each Groome location. Safety meetings, compliance audits and annual reviews are regularly conducted to assure consistent, safe practices throughout our company’s landscape, day in and day out.

We have the highest standards when it comes to maintaining our fleet of buses, vans and cars. Every vehicle in the Groome Transportation fleet is strictly maintained on prescribed schedules by our professional maintenance staff. With the safety of our customers and employees as a focus, we never cut corners when it comes to properly maintaining each vehicle. If a vehicle needs servicing, it gets serviced. If a vehicle needs tires, it gets tires. If a vehicle needs brakes, it gets brakes. No component is left unchecked, and all activity is properly recorded. Externally, we keep the fleet spic-and-span, and our customers notice. If there is a scratch, ding or blemish, we repair them all. No one pays more attention to the proper care of vehicles than Groome Transportation.

Driver qualification and training are key components of Groome Transportation’s operating plan. As a result, Groome drivers are a unique group of passenger transportation specialists. Each one has passed rigorous background check and pre-employment screening for physical ability and condition. They all have received initial driving and safety training instruction, as well as customer care reviews. All drivers are in uniform with Groome logos embroidered on their shirts and caps for easy recognition and to present a neat, professional appearance.

Topical safety meetings are held at each location to add to each driver’s continuing knowledge of safe practices. Quarterly random screening assures compliance with substance avoidance requirements. Annual physicals are provided by the company at designated local medical clinics to assure DOT physical standards are met by each driver.

At Groome Transportation, we pride ourselves on the use of state-of-the-art vehicles designed for your comfort and safety. Every seat has a seat belt, and every vehicle has DOT- prescribed safety equipment on board. Additionally, we utilize on-board cameras facing front and back to record any unusual event or rough terrain. Every specification we incorporate into our vehicles is geared to proper care of passengers and employees. Whether it is one of our 52 passenger motor coaches, 29 passenger minibuses or an 11 passenger Transit van, we insist on a great ride, secure luggage, and safe passage on every trip.

Not all vehicles are available at all locations.

1955
Military Transport Added to Richmond-Area Services
In the 1950s, Groome Transportation’s operational focus grew to include service from Byrd Field to Fort Lee and Fort Pickett and to several other locations within the city of Richmond.

1962
Expansion Through Diversification
The company’s offerings changed significantly in the 1960s. Groome Transportation diversified and also operated a fleet of 18-wheelers and freight docks as well as a rental car company.

2005
Chattanooga Adds Expanded Service Area
Groome Transportation of Tennessee was established in Chattanooga in 2005 with the acquisition of Express Shuttle, which had been providing transportation to the Atlanta and Nashville airports since 1995. The Chattanooga operation provides an expanded schedule to both airports - to and from Atlanta’s Hartsfield-Jackson International Airport and round trips daily to and from Nashville International Airport.

2012
Groome Expands to Augusta
Groome Transportation expands again with the acquisition of Easy Ride Shuttle Service of Augusta. The company now provides round trips every day to and from the area and Atlanta’s Hartsfield-Jackson International Airport.

Leave the Driving to Us!

SEND US A MESSAGE

Have a Question or Comment?
We would love to hear from you. 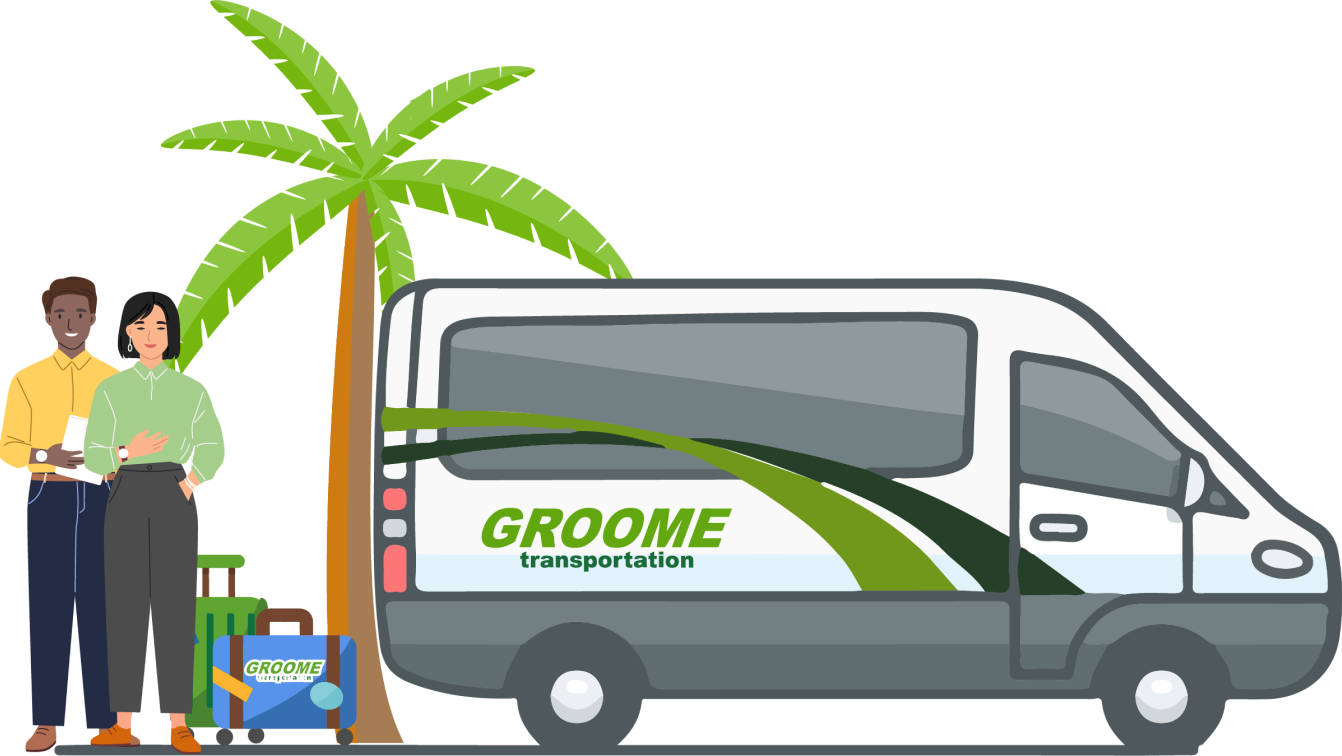